Shattered Hope is a one-off campaign for Dark Heresy, which needs a few tweaks to be awesome for veteran players.


Background
Pregenerated campaigns are terrible for railroading. The plots are very confined and predictable, the challenges are either easy or annoying —requiring trial and error. The battles are boring and never ending. Experienced players are complete munchkins and will do everything to sabotage a railroading situation as it isn't stimulating. Once I run a pregenerated D&D 4e Eberon campaign, called "Seekers of the Ashen Crown", because I hadn't played 4e and I didn't have much time to prepare. It was so tedious that I let the players go wild. A joke item (a sealed book called "The Necronomicon") became the focus of the game and the plot spiralled into a rollercoaster of hilarious madness, which made the game the best/maddest I have ever heard of (Link to story).

I am a big fan of one-off campaigns as it allows certain concepts to be tested, new games to be trialled and it allows folk who can't make it to reoccurring sessions to join. The downside is that they require extensive planning. Generally par with playing time. Consequently, I once opted for a pregen for Warhammer 40k: Dark Heresy, called "Shattered Hope". It is a typical WH40k:DH game: first you talk to people to find the place, then go there and kill everyone.

Why Tweak?
This campaign is pretty railroaded and badly written, especially at the start. You arrive at a camp, visit the boss, who despondantly sends you to the problem site. The site is a mine (dungeon) that requires a few agility tests, before becoming a monster dungeon.


Plot Changes
To spice up the encampment section for my veteran RPG players (who hadn't played Dark Heresy before), I made it so they had to escape the camp.
First the boss (Nihilius/Waldegrave) denies them access to the mine (checks to not get kicked out immediately, to counter his disappointment, to make the prove themselves (e.g. firing range), to make him reconsider) and then they find their own way.
I drew a map of the encampment. Parenthetically, it is curious that the place isn't a nobleman's villa, but a military encampment —despite the deviance from typical Dark Heresy flavour, it is actually more awesome.
The reason why the PCs are called in is terrible. The Imperial Guard could handle a few mutants with the help of the inquisition. Therefore, I changed it to a hostage situation, the governor Reginald Firemoor was observing the purge when he got ambushed and abducted. A check will make the boss tell the PCs a peon in the gubernatorial office sent a report out (against his orders) hence the inquisitorial involvement and his despisal of the party.
Reggy is being held hostage, but has been converted into a trice-bound dæmonhost:
WS 26; BS 30; S 44; T 45; Ag 12; Int 85; Per 65; Will 69; Fel 13; wd 30 1/2/3/6; Dæmonic TB 8; fear 4; flier 1 (it clichédly hovers dæmonically with its head back); ψ: 4; holocaust, call flame; catch projectiles; ψ crush; Push).
Due to the beefed up party, the mutants were increased in number by 50%. Even with dæmonic TB6, a plaguebearer (p. 26) is too weak, so T 50 and wd 20 is a good mod, due to the switch in final boss, the plaguebearer can be deteled if time is running short. 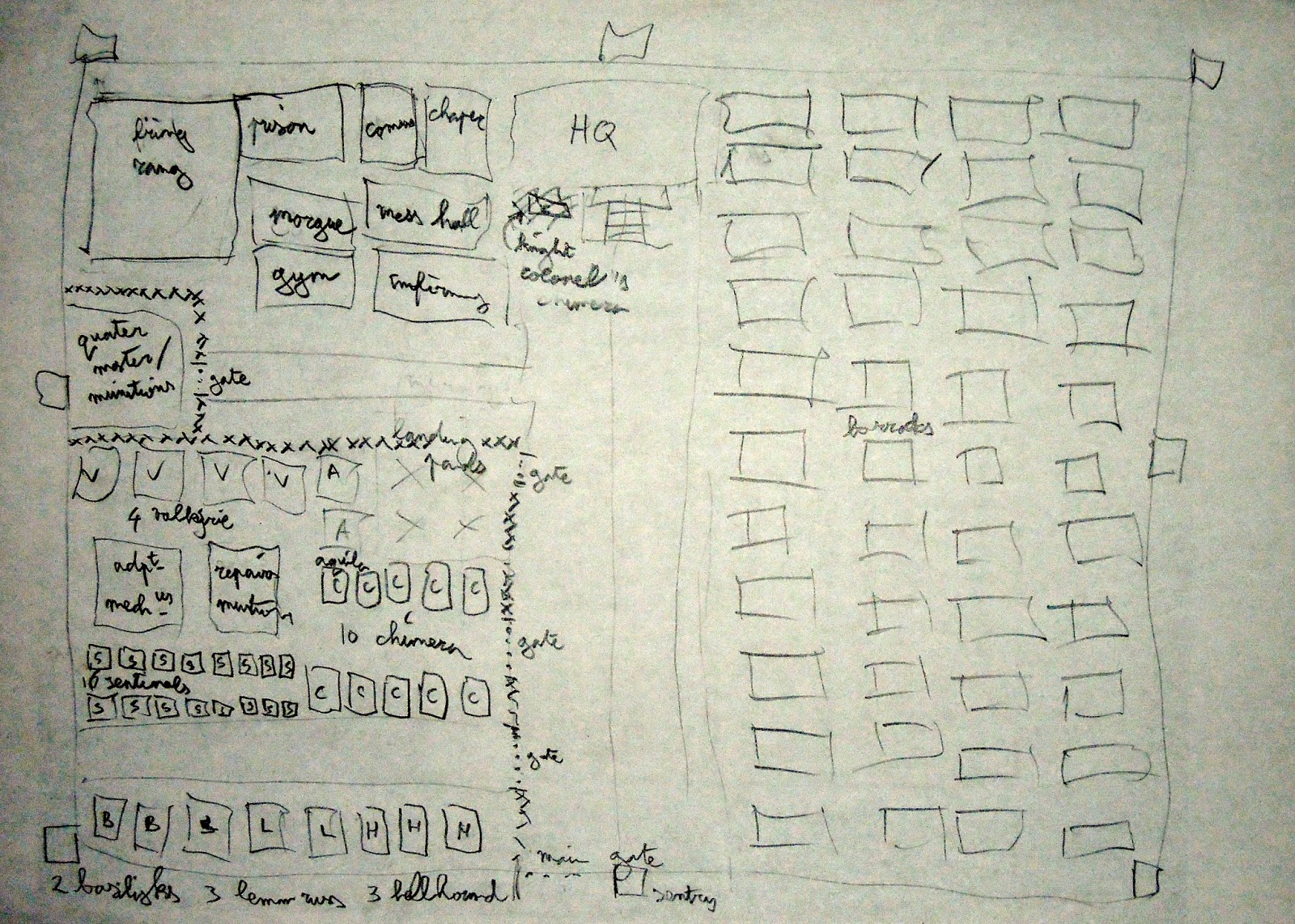 Upgrade PCs
The pregenerated characters are terrible. They are of classes nobody wants. So I chose more popular ones (techpriest, psyker, guardsman (Ogryn) and killer). For a one-off, starting poor isn't really the most fun, therefore I gave them 700 XP. The Ogryn guardsman isn't standard DH, but it is very WH40k. I prechose most of the upgrades, but I let them roll the dice (feel free to message for the sheets). I made sure the techpriest got drive (ground).


Upgrade Boss
Commissar Nihilius? So cheesy it is painful. Also,  a commissar is not in charge of a measly battalion. The contemporary ranked officer in charge of a battalion is a colonel, as WH40k likes baroque titles, I changed it to Lord Colonel.
The WH40k:DH fluff has the imperial guard regiment as red coat themed as opposed repainted Cadian troops. The Shattered Hopes author forgot that. So I changed his name to Waldegrave —I printed Wikipedia's list of generals at the battle of Waterloo (link) as a namegen. Lord Colonel Waldegrave was annoyed at the party sent by the inquisitor, so sends them out and asks his secretary aid to call back the Aquila —I set a timer to 1 hour.
The players have to find a way to the mines by some means, ideally by lying to the subordinates or by stealing a vehicle…


Vehicles and Freedom
I also got ready with the Only War manual, and bookmarked a few vehicles as I put Aquilas, Basilisks, Lemur Russes, Hellhounds, Chimeras and Sentinels in there. If my players had commandeered a basilisk, I would let then: driving it down a mineshaft is their problem. The idea of doing it is exciting, so giving that option, spices stuff up without doing anything. I put two vehicle sites, one the main vehicular yard, the other just the command chimera outside the HQ.
Also, I photocopied page 167 from the Only War manual: Table 6.5 Random Issue Gear. The players kept looking for crates, making looting crates the most beloved feature —if it's a one-off, excess loot isn't a problem. As many check fail on DH, it was nice making them have easy inconsequential checks.

Checkpoint
At the entrance to the mine I added a checkpoint, where the party has to blabber/bribe/force their way through.


What My Players did…
My players sealed the lord colonel in his room. Then distracted the aid by making the psyker call an animal (dog) and then tried hacking his computer to get clearance, but failed so badly the crashed the system across the camp. Their munchkin glee brought the to the quatermaster's munition bunker —they tried to steal stuff, failed and run away with something. While cruising around they visited the infirmary, the Ogryn had so many degrees of freedom on an intimidation that the patient shat himself.
Once back on track, they then enacted the most complicated, convoluted and clumsy heist ever, but failed to steal a Lemar Russ. Now with a few folk on their tails, they retreated back to the Lord Colonel's building and steal his personal chimera. The driving was too hard and crashed the thing a few times (raising suspicion) before breaking through the main gates. At the checkpoint at the entrance of the mine the techpriest irreparably crashed it. There they were held at gun point (more failed fellowship), until the pyker summoned animals, which happened to call a pack of mutant dogs, who killed most of the platoon in the firefight. They then stole a Tauros, a nimble Elysian vehicle, which I put in there to counter the Italian driving (homebrew off web). Throughout the camp, checkpoint and mine they gleefully kept finding crates. The Tauros did a few checks until it crashed. In the mine proper, by the time they got to room #10 (the explosive tanks), they were throwing grenades into the rooms after a peak, which is classic Call of Cthulhu behaviour that makes sense as opposed to the expected tactics in the booklet. Room 7 contained a bound Firemoor, who after a round of combat awakes as a dæmon, 6 mutants and some barrels of explosives. The players displayed a fine blend of tactics, cowardice and pyromania, despite the poor aim, which led them to a glorious victory. A year on, the player who played as the techpriest gets mocked for the poor driving.
Posted by Mastocles at 8:26 PM