Progress level. Before talking about the various sources and ideas, it is best to mention a way of categorizing technology. The D20 system is an adaptation to the 3.5 rules stripped of magic, but imbued with technology. It copied from Alternity the progress levels system (link):
This is a very interesting and intricate framework as it sorts items into avant-garde, contemporary or antiques. The downside is that the D20 future manual is a bit tedious due to the repetition. But it is useful for comparisons.

Settings. There are many settings that use technology in D&D and complementary games, here are the most notable ones:
Eberron. I once run a D&D 4e pre-generated campaign (Seakers of the Ashen Crown) that was so bad that the players and purposefully derailed it and the lightning train (also mentioned in this forum post). Lameness of the pregen apart, Eberron does not have much that distinguishes it from Faerûn, bar for the warforged and the different geography. Conceptually they were going for the magic-enters-the-industrial-revolution as seen in the Discworld novels (without the comedy), but have not added much that would make Eberron a planet in a more advanced age that Faerûn (PL4 vs. PL3). While the generic cities and gods are fleshed out, the lightning rail isn't described enough and instead one has to rely on a third party vendor for a map of it. In my game that went off the rails I used the Pathfinder pure steam vehicles were a great addition that blended in beatifully, namely the war zeppelin and the gyrocycles (pictured below; really fun!). In that game there was also a lot of extraneous items as the main plot point was an alien artefact warehouse, but that is a different story (see forum post). 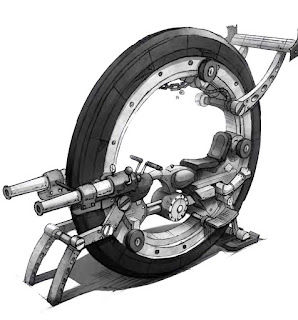 Pathfinder. While talking about Pathfinder, one thing that they did was cluster together and attempt to sort out forging materials (see link). Material is something they removed in D&D 5e as it was unruly and complicated, but it could be reinstated. In PF, primitive weapons made out of bone, gold or stone can be made. With the Pathfinder technology guide skymetals can be used to make better weapons.
This latter guide is the best out of those mention above as the concepts are better fleshed out. They include:
Parenthetically, there is a bomb (artifact) that does 10d8 psychic damage on DC35 Will save (or death) in a mile radius. Unfortunately a tarrasque is immune to mind effect, but if it weren't with a Will +12 it would die (regardless of the 525 hp).

Armour. In Pathfinder they introduce guns. Guns do touch range attacks as they burn through armour. In D20 and other D&D systems this is not the case.
The problem stems from the weird way armour works. And attack is rolled against an AC, which is 5 (the chance of hitting a mannequin in the 5 ft. square) plus the dex score halved (the defender dodges, 10/2 plus dex modifer) plus armour bonus (the blow is neutralised by the armour). The latter makes little sense as it is independent on the blow, be it a stone or a laser bolt. In WH40k:DH armour bonus is subtracted from the damage, not the attack (making it damage resistance), and when a primitive armour is used against an more advanced weapon its AC bonus is halved. The problem is that allowing touch ranged attacks break the game regardless of how much damage the weapon does, so the best bet is to ignore the issue as has clearly been done.

Reasoning. A futuristic weapon in a full fantasy world however breaks the game: I had a platoon of NPC paladins die galloping futilely to get a sniper, a T-rex take 89 damage from a laser carbine and an TPK from a Dodge Viper crash. In those case it is a comical addition and the integrity of the game must have already been compromised anyway, so any source is fine (I'd recommend D20 weapon's locker, Dragonstar and PF technology guide).
For a place like Eberron where flavour is needed without breaking the game, the PF Pure Steam vehicles are a must possibly with  the WoW rules for item creation.
Posted by Mastocles at 6:25 AM