An armory of musical instruments

In a previous post (picturing bardic spellcasting) I considered conceptually how is it that bards spellcast, here I look into what musical instruments can be used.


A word on proficiency…
In 3.5 and PF, each family/group of musical instrument got its own performance skill, making it a real drain on ranks. In 5e the situation is different:
The word type is very peculiar. It is not a musical term, but sound like a grouping. Flute is one on the list. The flute family consists of reedless woodwind instruments, includes pan pipes (one of the other options) and can be subdiveded into the concert flute family, which includes the bogstandard flute (concert flute). If a bard can play the concert flute, can he play the piccolo? From the sounds of it, it is a simplification of the former rules as it impacts mostly fluff.  Curiously Pipes of Haunting and Pipes of the Sewers (DMG p.185) require one to “be proficient with wind instruments”, which is a 3.5 leftover. Most GMs would allow a houserule correction (increase in complexity) of the type back to the old way (keyboard, percussion, string and wind —song isn't anything in 5e, but a GM would houserule it to require proficiency). After all, knowing a string instrument makes it easier to pick up another.
The fact is that there is little reason to be proficient with more than one instrument, unless the specific instrument has something special, which isn't the case in 5e (only fluff). 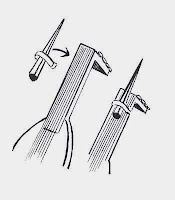 In PF, 3.5 and 4e (but not 5e), being in melee range without a melee weapon would cause an Attack of Opportunity. As a result, the most bizarre solutions appeared, courtesy of Book of Song and Silence. The most common was the instrument bayonet (a dagger re-branded in all effects).
I played a bard in PF with a spellstoring dagger loaded with healing spells to not cause attack of opportunity and to fight undead —the enemies that nerf bards.
Axe-guitars are not official, but I am guessing were popular with skalds/bardbarians. 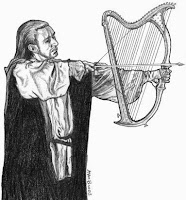 Also, sheathing a weapon was a movement action (dropping was free, hence weapon cords), while in 5e it is a free action (a second interaction is a main action). Consequently, weapon instruments were of further use. It also gives a ranged attack instrument a reason to exist. Hence the harpbow (pictured), which is magical instrument, hence it does not untune when arrows are shot.

Adding one's charisma to attacks as opposed to strength was also very appealing and many homebrew weapons exist for that —harpswords and lyreswords.
I must admit I haven't seen yet many of these for 5e. But I bet they will be coming.

Magical instruments
There are many magical instruments that aren't weapons. Most of them cast a spell when played and are therefore pretty lame. The only one of note, in my opinion, is gone: the Lyre of Building. The reason why it was removed was that the wording was too open to interpretation. Elsewhere (link), I discuss restrictions to make it usable, which makes it a fun item.

The 3.5 Book of Song and Silence added an extra layer of fun. Each musical instrument had a unique power to it. In the standard game, a harp is no different than a drum, while with the Book of Song and Silence each instrument has a particular quality to it, such as small bonuses/banes for certain spell types. Generally high pitched instruments were for buffs, while low pitched for debuffs. As a result, the type of instrument played made a lot of difference!
One instrument that stands out from the list from the Book of Song and Silence is the Alphorn. This instrument can be heard from 1d4 miles around —great for Bardic Inspiration from afar!— but has the catch that it is impossible to carry without a Bag of holding.
However, in most cases the bonus is minor/neglegible and feels munchkin in character.
Furthermore it suffers from the side-effect that it might spoil the character fluff. Specifically, if a specific instrument is part of the image, such as a dwarven bagpiper, he would has to use something else for certain effects. A partial solution is to houserule certain variants with certain properties if possible. There is only one highland bagpipe, but the lute comes in different shapes, from a treble lute to a theorbo. But in light of the minor effects, it is probably not a worthy thing to houserule, instead it can be simply a flavour thing that a bard uses a piccolo for buffs and a bass flute for debuffs (without any benefit), while keeping only instruments fancy effects especially those that can't be moved easily.

Posted by Mastocles at 8:37 PM