The bard is a rather unusual class in D&D both in concept and in gameplay as it is a sorcerer that casts spells using a musical instrument, but isn't as good. I say sorcerer due to the charism, but bards used to be a proficiency class for druids —hence the leather. So it's nice that that got cleaned up, but I am nevertheless confuddled by the logistics of bardic spellcasting...

Conceptually how does a bard spellcast?
It is never explained.
Spellcasting normally consists of drawing something in the air (S) with something from the spell-component pouch in your hand (M), while saying something in Latin/Quenya (V) —as shown in the picture.

Pathfinder
In Pathfinder there is a feat called Spellsong, which meant one sneakily wove the spellcasting into a musical performance. In that case the musical instrument's music is the Verbal component, the instrument itself the focus (Material), while the Somatic is probably crazy hand-gestures/moves/guitar-stunts (S can be cast with a free hand or the hand holding the focus). To make it par with the other classes, the instrument is somehow played one-handed.
Additionally, at mid level, one does Bardic Performances as swift actions to boost allies. Even though there is no mention of a different instrument, I like to think is it, making the bard a one-man-band  —technically the Dissonant Voice feat makes Singing the chosen performance for the Bardic Performance—, while musical instruments with bonuses for the spellsinging as the spellcasting performance is countered by the target's perception check —technically there is ambiguously written somewhere obscure that the bonus mightn't apply. As a result, the bard is a one-man-band that performs magical music.

D&D 5e
In D&D 5e, there is no mention of "music" or "note" in any spell description, while the fluff in the description of bard (PHB p.52) says:
Most likely this means you can spellcast with rhythm, not that you spellcast with musical notes as Verbal. RAW, you simply need to be holding your musical instrument (or using a spell-component pouch), which is waved around like a stick without a musical performance… bar possibly with a rhythmic chant (Verbal) as per fluff.
Bardic Inspiration on the other hand says:
Which means you have to sing or play an instrument to do it (even if you're motivating them to stealth). Parenthetically, like in previous editions, there is no restriction on how many things you do with your mouth in a turn, so you can talk (free), spellcast with Verbal component (main) and compliment someone to bardically inspire them (bonus), so you'd be mad not to. A further parenthesis… in gameplay the stirring words are generally from Monty Python's The Tale of Sir Robyn. Anyway. Bardic inspiration requires oration or music.
However, there is no harm however picturing the bard as playing an instrument or singing (plus spell-component pouch) to cast musical magic. In the case of spells without Verbal (e.g. minor illusion), it could be see as playing pianississimo (very very softly), or a rhythmic tap.


How does one hold a musical instrument one-handed? 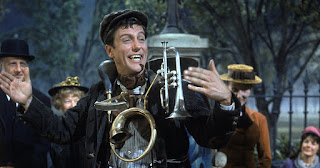 If one Inspires with an instrument (not singing, just out of flavour) or if one spellcasts by actually playing (not holding it, just out of flavour), the choice of flavour would be a hindrance, so the one-handed instrument playing is sensible. But it could be flavour-justified that the weapon is sheathed as a über-free action as opposed to holding a two-handed weapon in the off-hand or sheathing only the dominant hand weapon when two weapon fighting. Valor bards can use shields (donning/doffing is two actions), which consist of an arm strap and a grip, so the grip could be released in favour of holding the instrument, without lowering the AC —yet it doesn't work for anything else, such as a bow (even if youtube videos show the contrary). Another solution is to go all out an get a weapon instrument (discussed here), therefore renouncing all physical credibility in favour of awesomeness…
Posted by Mastocles at 7:24 PM