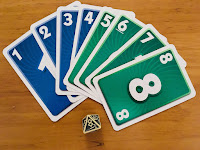 Skip-Bo is a really rubbish game. It is like Uno, but with tedium replacing treachery. However, a Skip-Bo deck (with the 18 skip-bo cards removed) can double as a random number generator. It has twelve series of numbers form 1 to 12, which has two advantages over poker cards: the numbers go up to twelve and cards of a same value are identical (no suits, no background distractions). So if you used between a single and all twelve sets, once you burn through the whole deck you can rest happy knowing you had no bad luck (or good luck).

Statistically this benefit is not large, but is not neglegible. My best guess on how to express luck is to use the 'standard error of the mean'. This is the average value of how off can the average of the roll results be from the mean dice roll value after a certain number of rolls. A die rolls a uniform distribution and its standard deviation can be obtained from Wikipedia.
Doing some maths, it is clear that 'luck' dissipates rather fast: 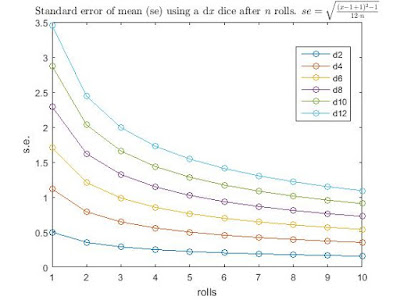 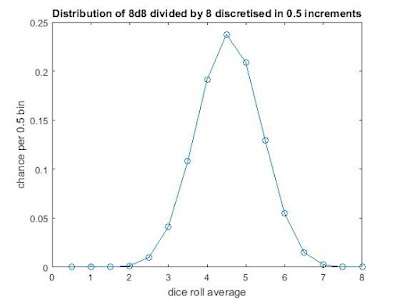 I should note I am talking here about fluctuations in a small number of rolls that in the long run cancel out. In another post, it is shown that there are lots of equivalent dice combinations that in the long run (i.e. luck average out) do identical damage (e.g. d12 ≡ d10+1 ≡ 3d4 - 1 ≡ d2 + d3 + d5). These dice do have different levels of 'luck', some quite dramatic, but it doesn't at all matter on average and didn't result in a significant about of lucky victories in dire and contrived matches.

In conclusion, using a single set of a deck of cards followed by reshuffle is no different than a dice in the long run, but on a small scale between each reshuffle it does make a difference as it avoids the ten or so percent fluctuation in damage given, but doesn't alter the standard deviation as much as changing the dice combination. With more than one set of numbers in the deck, the benefit is annulled, not to mention that accusations of bad shuffling will be more likely.

PS. If a royal-free poker deck where used instead of a dice, the suits could be a marker for some interesting dynamic, say the weapon does fire, slashing, acid or blugeoning damage.

Posted by Mastocles at 4:31 PM